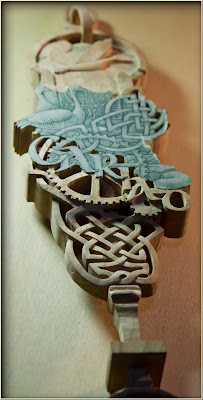 Fretting out all the inside cuts for the lettering, the celtic knot-work and the gear wheels has been a bit of a problem. My attempt to make things a little easier for the scroll saw work, by cutting away much of the waste on the underside, only created other problems. I no longer had a stable platform and even after taking the precautions that I had foreseen these were barely enough to make cutting possible. The job did get done of course but with much more difficulty than I had envisaged. The lesson learned is to leave a good solid base on the work for the scrolling even if it means a very slow progress through the thicker timber.
The precautions that I was able to take, to try and provide, what I thought would be a completely stable platform, was to keep all the shaped off-cuts from any previous cutting (always a good idea) and reassemble the block from these. I had begun to do this prior to drilling, on the drill press, the entry holes for the scroll saw blade. Then with clear packing tape and hot-melt glue, I re-assembled the block. 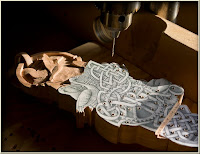 Even with the block re-assembled there was enough flex in the assembly to make the cutting difficult, requiring extreme concentration constant stopping and a cautious cutting a little further from the line than I normally would. In some areas, where overlaying elements are to be carved and no saw piercing was possible, it would be only by carving that the forms could be established. So likewise I would simply have to carve up to the lines where I hadn't dared too close a cut.
With Most of the scroll sawing done I have started roughing out the major forms and establishing them at their various levels relative to one another, by carving their outlines, 'moving them down' in relation one another and re-carving as I go.

I had taken advice from David Western about the suitability of cherry for this piece. David had warned that apart from its general suitability for the particular needs of this piece and its sheer hardness, cherry had a tendency to be a bit splintery. I have found this to be the case. The timber cuts very crisply and cleanly with the grain but not so well across the grain where the fibres tend to separate into a slightly splintery texture. These areas where they occur, I notice, are easily cleaned up with some fine filing with a needle file, so I am confident that the long and careful finishing process is going to eventually bring up a surface that will do justice to a beautiful piece of timber. 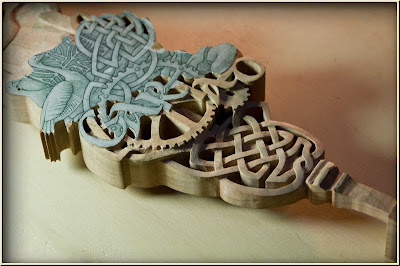 So I will be continuing to rough out all the forms, then thinning down the knot-work and working the back of the spoon into the total design and sometimes refining some parts as I go to see how things are going to look.
Posted by Whimsical Wood at 5:47 PM 3 comments: 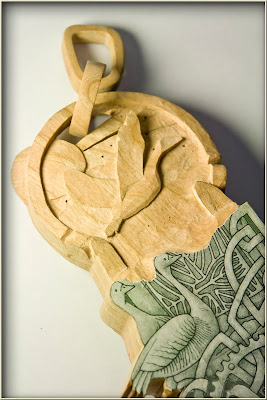 The intention had been to commence fretting out the pierced areas as the next stage but I was a bit worried about the small amount of room I'd left for separating the chain links at the top of the spoon, So I tackled Carving the chain first. After carving the chain links I began establishing some of the levels to which various elements would be carved. Doing this helps me to visualise those parts of the design that couldn't be be fully planned in the two dimensional drawing.
I also did a bit of roughing out inside the spoon bowl and will get back to this later, for the time being I'm trying to leave as much material to work with as possible, partly to safely creep up on final dimensions and partly to accommodate enough freedom to make further design decisions as work proceeds. 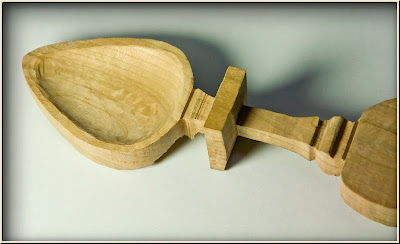 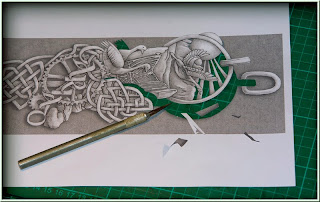 Having a fully rendered illustration of the intended spoon that can be reprinted as many times as needed is a really useful thing for a couple of reasons. I can cut and paste elements of the design back onto some carved away sections of the spoon and the shading, especially on the celtic knot-work gives me a ready reference both for redrawing on the carving when necessary and to avoid mistakes in the third dimension such as the 'under and overs' in the knot-work. 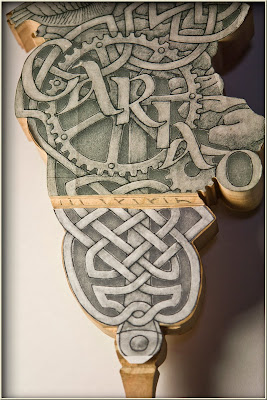 One simple tool I find useful at various stages and in lieu of sandpaper until the final finishing, is a trimming knife blade which can be used as a scraper just to tidy things up, like the exit points of drilled holes. It is always a good idea not to use any sand paper until all use of your edge tools is finished. If any sanding has been done prior to using your carving tools the this scraper can be used to scrape the area clear of any grit that may be embedded lurking to take the edge off your tools. Honing vigorously on just one side of the trimming knife blade imparts a slight burr on the edge and it will scrape more deeply producing fine shavings. 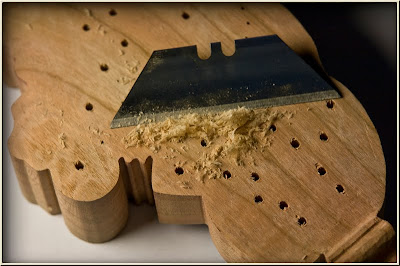 Another useful tool, if you don't have a carving gouge is a (cheap or reclaimed ) chisel ground with a round edge, it performs the same task as a gouge as you can see in the lower photo. 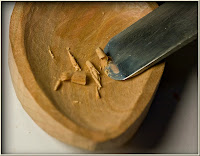 Posted by Whimsical Wood at 12:17 AM No comments: