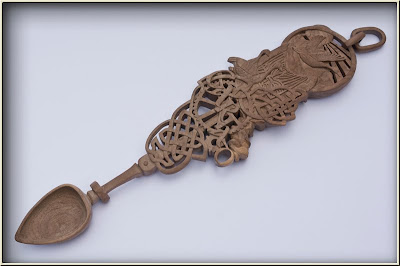 The 'Cariad' Welsh Lovespoon has now been completely carved and the sanding and finishing process has begun.
Any further work with edge tools, which should only be a little tidying up here and there, will be done with small 'disposable' blades (of course even these can be re-honed to acceptable sharpness again) so that the abrasive particles left on the timber will not dull my carving tools. If I do need to do any more carving work with my usual tools then I will first scrape the area with a trimming knife blade to remove any remaining abrasive particles.
To begin the finishing I will commence with 240 grit paper and move up to 1200 in stages. This might seem excessively fine but I believe it helps to achieve the kind of finish I'm after.
I will be using a tung oil based Danish Oil finish applied with a small brush and worked with wet and dry abrasive at the 400 grit stage to fill the grain prior to the final coat. The final finish will be a wax polish to bring up just the right sheen. 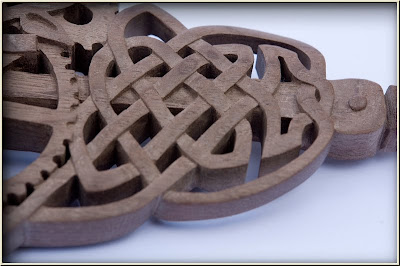 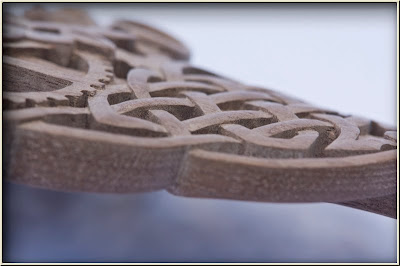 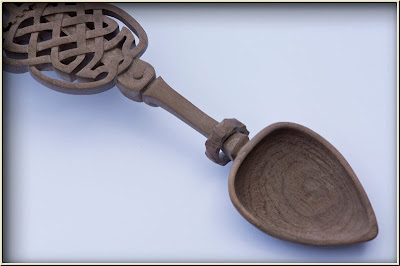 When the work has been finished to the right level, then the play of light on the surface should bring out the details in the carving and the beauty of the timber, much more so than can be seen at this stage.
Some types of carving are best not sanded, letting the tool marks show and bear witness to the carver's interaction with the tools and the wood. In this case and possibly with love spoons in general I think a fine finish looks best. I can't articulate why this seems to be the case, perhaps it is the scale of the work, how close a scrutiny it invites or how much it asks to be felt in the hands. It all depends on what achieves the most pleasing result and suits the work best. 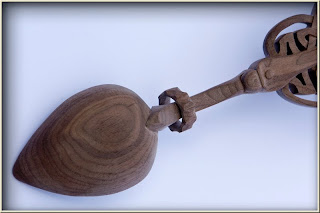 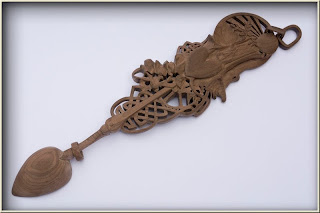 Posted by Whimsical Wood at 8:59 PM No comments:

Cariad Lovespoon Back on Track 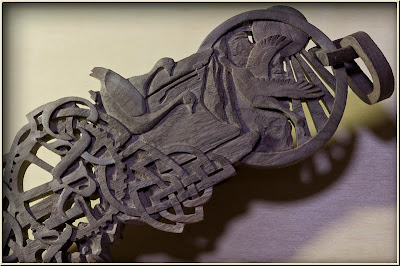 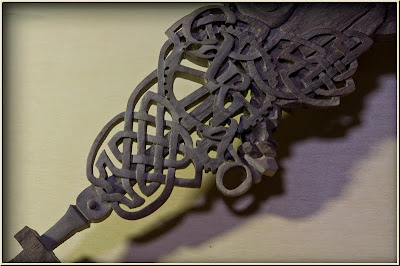 Most of the main details of the 'Cariad ' Welsh lovespoon have been roughed out now, including the reverse side of the spoon. Each element has been established on its level in the multi-layered design. Some teeth still need to be added to the gearwheel and pinion, the 'iron ring' needs to be carved and separated from the lower neck of the spoon and the bowl of the spoon needs to be fully roughed out.

Then remains the long and important task of refining all the shapes, first with edged carving tools, then with fine rifflers and needle files, before final finishing is done with a series of finer and finer grit, wet and dry abrasive papers, until a silky gloss is obtained. Then at last the final finishing with danish oil and polishing with wax. 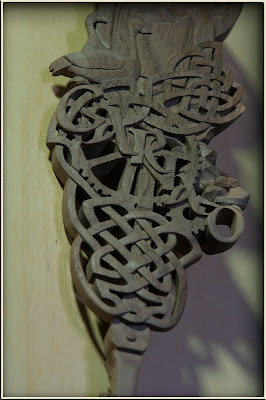 You will probably have noticed the change in colour of the spoon at this stage. The cherry 'Cariad' spoon now known as the 'learning experience spoon' has been replaced with the walnut version of the 'Cariad' spoon. The Cherry spoon, due to some earlier problems in planning a workable procedure, had started to deviate from the original design in ways that I was not happy with. The top area of the spoon with the links and sun motif had been very cramped and ultimately led to a reshaping of the rays that basically spoilt that part of the spoon. I had no choice but to start over, and as I could not get hold of another piece of cherry quickly, went back to a nice piece of walnut I already had and to a new spoon, slightly scaled up in size and more closely following the original design.
The walnut has not proved to be so much a problem for holding fine detail, as I had first thought and the darker colour seems also to work well with this design.
There is a little more detail work to be done on the Geese, mountain and the gate at this stage and then the finer finishing. It's difficult to see here but the grain in the walnut has shown a fortunate presence of figure on the side of the front Goose, closely resembling the banding on its wings and body. When final polishing is done the figure in this timber will be clearly seen and its present drab appearance will be replaced by the sheen of polished walnut.
Some work has now also been done on the back of the spoon with motifs added to make use of the reversed shapes that are made by the lettering and the goose wings intersecting the sun's rays on the other side. 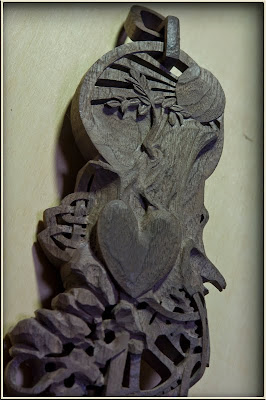 The back of the spoon has been roughed out and features some different motifs presented in a slightly more abstract way. The sun with its rays, now tops a regrowing tree stump, the roots of which blend into a looser montage of knot pieces, gear fragments and rocks with the connecting rod merging into the neck of the spoon bowl.
The re-growing tree stump is a favourite motif of mine and I have used it as the signature piece in hand-crafted wooden jigsaw puzzles that I have made in the past. Apart from the obvious meaning a re-growing tree stump conveys, like renewal and vital continuation, it symbolises, in the book of Jeremiah and other places in scripture, the promised Messiah Jesus, and the final establishment of his eternal kingdom at the end of this age. A kingdom into which all people are now invited at his expense and as his cherished possession. 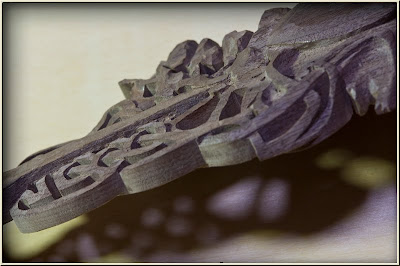 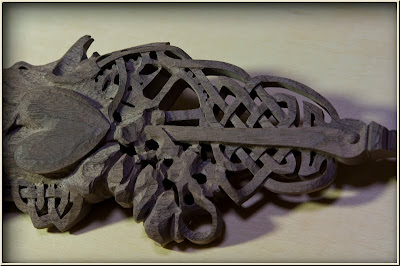 Posted by Whimsical Wood at 3:34 AM No comments: