The Tools I Use

The tools I use most for carving are palm tools. Most of this carving is miniature carving, especially welsh lovespoons, and it is  these tools that suit best the way I carve. The work is held in one protectively-gloved hand while the carving tool is manipulated with the other hand. The actual cutting movements, of the edge tool, are made in opposing and assisted relation to the dynamic and reciprocal actions of the work-holding hand. The general working principles remain the same as those pertaining to bench carving, but this method and tools are particularly suited to working at the portable lap-bench I use.

I use a band saw and scroll saw for much of the preliminary work but hand tools do the detail work, in most cases. I have a Dremel but I rarely use it, because it is less convenient to use inside the house, and I prefer the more familiar chisels and knives.

I do intend to develop some skills using rotary tools and make use of them in my carving — one day.

I use a variety of palm carving tools and while the high quality brands are a pleasure to use and are pretty much ready to use straight off, even the cheapest of the other tools available can be made useful for miniature carving, after some work has been put into improving them. This however can take quite a bit of work — getting them to a usable state, that's why they are cheap!

But they are cheap enough to experiment with — you can change the geometry of the tool for special uses, and you can do it without jeopardising a more expensive carving tool.

Even cheap bench chisels can be ground to a round-nose cutting-edge and in this form they function well as gouges. Other shapes can also make useful carving tools when the time is put in to make them razor sharp. It is this sharpness of the edge that enables the tool to do its work. It was discovering this at one time that brought about a massive leap in the interest I had in woodwork and my enjoyment of it.

All of a sudden, edge tools sliced pleasantly though timber leaving a glisteningly smooth silky wake. Ultra cheap 'carving sets', sets that had convinced me that wood carving was a mysterious dark art, by nature out of my reach, actually performed pretty well now. 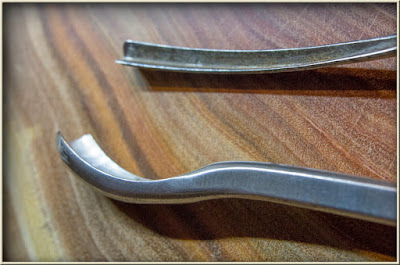 Before this discovery of sharp tools, I did once, after again thinking wood carving would be nice to try, buy a single Pfiel carving tool. This tool would have been sharp enough to use straight off. However I could only afford one tool so I chose the most peculiar looking one I could see (deep short bent spoon gouge), thinking that an unusual looking tool must produce unusually good cuts and therefore unusually good work — I couldn't get it to do anything! 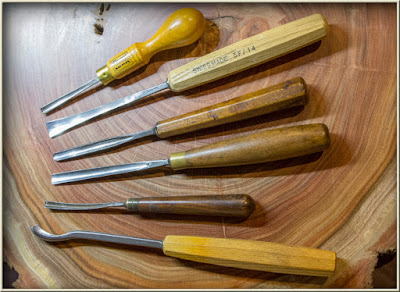 This particular tool (at bottom) the short bent spoon gouge,together with the other tools shown here are bench tools and are designed to be used with two hands or with a mallet. When I had carved my first lovespoon and then, after a year or two, I had seen just what could be done with lovespoons, especially by David Western who's book on the subject I subsequently purchased, I began to take the carving of lovespoons more and more seriously.

I could see lovespoon carving as an art form that offers plenty to anyone looking for an expressive and low-cost way of working with wood. A beautiful and worthwhile — though not so lucrative — participant in the parade of human culture, and therefore a tiny, but pointedly pleasant particle of this creation, wherein we live out our present lives under the sun.

I was using the longer handled bench tools for carving these early lovespoons but in the manner described before, holding with one hand  and carving with the other. These tools worked well enough like this but it was obvious that the palm tools would be more ergonomically suitable. 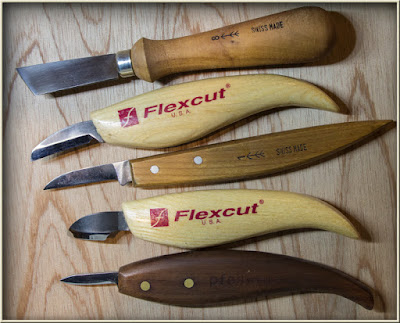 Knives play an important role in the type of carving I have been describing and you could work entirely with knives, however I prefer using gouges and chisels most of the time. Palm tools never-the-less are often used in a manner, and with grips and movements, that relate closely to the way you would use knives.

To my knives and gouges I have added a number of small home-made chisels and re-purposed tools to accomplish specific tasks, and while I was at it, many experimental tools just waiting for useful employment if the opportunity arises. A proportion of these tools are very useful.., others not so much.

Most of these tools are fashioned from music wire with no special treatment apart from hammering, 'grinding' on abrasive papers and the honing and polishing.

At my lap bench I keep a few aids for keeping tools well honed during use. A diamond grit 'card' and abrasive papers for 'slightly-serious' repair of an edge and a Flex-Cut honing board and compound for honing. Fine abrasive papers can also be rolled around various diameter dowels to be used as honing slips on the inside edge of gouges.

A few other tools, which overlap the sanding-finishing category are small blades that I use as scrapers. These can be made to cut more aggressively as necessary, by working a fine burr on one edge. A small triangular file can also have the teeth ground off at the end, which is smoothed and polished on each face to make a pointed three-cornered scraper.

Most of the sawing work I do in the workshop on the band saw and scroll saw, but I also keep a hand fretsaw and adjustable piercing saw at my lap bench. These are useful for any saw cuts needed and for any very fine fretting that requires a jeweller's piercing saw and blades, I have cut a small bird-mouth recess in the bench peg for this purpose.

A number of needle files, small rasps and rifflers bridge the gap between shaping/carving and finish sanding which I will cover in the next post. 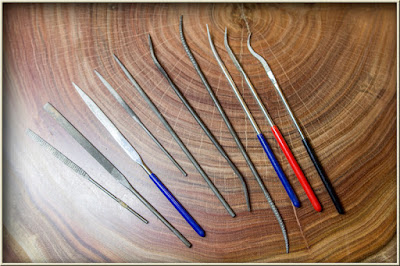 Posted by Whimsical Wood at 3:30 AM 5 comments:

Email ThisBlogThis!Share to TwitterShare to FacebookShare to Pinterest
Labels: The Tools I Use
Newer Posts Older Posts Home
Subscribe to: Posts (Atom)