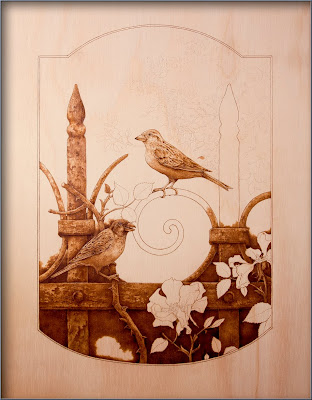 Continuing with 'Iron Fence with Sparrows' I have switched to a large flat shading nib tool to do the background. I hardly ever change tools if I can help it and almost exclusively use a modified writing tip even for shaded areas.
The larger nib is certainly faster and it can still be used in a manner pretty much like stippling, just gently brushing short gliding strokes to build up increasingly darker tones.
I haven't found enough time to get as far as I'd hoped and will need to find a solid block of time to have it ready on time. Even with using the shading tool to speed up the background 'painting' process I will need to go back in with the finer point drawing tool to tidy things up here and there and establish a pleasant interplay of changing textures.
The more complicated area of background at the top and right with the blurred foliage over a darker distant background, still needs to be worked into the composition and this is something I will have to run through my mind as I correct the tones in the background. Then I will be able to tackle the pale subtle shading in the fading roses in the foreground.
Posted by Whimsical Wood at 5:37 PM 1 comment: 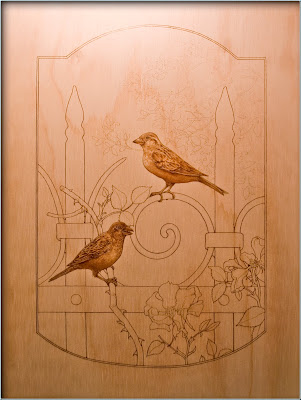 I have just commenced work on my next pyrography piece 'Iron Fence with Sparrows', which needs to be completed early to mid June.
The design has been penciled onto the hoop pine ply board and the basic line work has been burned in. The two sparrows have been completed, however the lower, male, sparrow needs some subtle changes around the eye area. This would be enough for me to consider starting again, because the eye isn't convincing enough, but there just isn't time.
There will be some other challenging aspects to this work before it is finished, as I intend to include some large areas of blurred dark tone in part of the background, for an intended chiaroscuro effect, plus some other tricky blurred shading in some other background areas. The pictorial effect will depend much on the success of this, but the eyes of the sparrows are going to be no less important.
Posted by Whimsical Wood at 3:54 AM 1 comment:

We have returned from our trip and I have made some changes to the 'Cariad' Spoon design.
The suggested canadian geese have been added, the 'D' in Cariad has been lowered a little, the lower part of the celtic knot-work has been made a bit less angular, with fairer curves on the outside strands of the knot-work and the spoon has been lengthened in the neck towards the bowl.
The challenge with the canadian geese will be, to somehow indicate their distinctive markings, just by shadow in the carving. The subtle use of some carefully placed fine engraved lines may, I hope, achieve this. This is a problem to be solved at the carving stage however and will be somewhat contingent on the dictates of the piece of timber used.
When this part of the design is finalised I can design the reverse side consistent with the front and with its own motifs, but a little simpler than the front.
I have another pyrography project to design and complete by mid June and should be able to commence work on the spoon after that.
Posted by Whimsical Wood at 4:40 AM No comments: