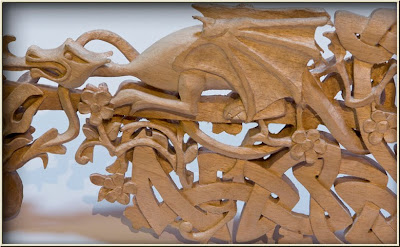 All of the main areas of the design have been roughed out now and most of the design decisions have also been made. That is, decisions that relate to the various depths in the three dimensional form of the entire carving, where the many elements appear. The refining of the forms, adding of details and then the long and careful preparation for the final finish should be a series of tasks a little less risky so far as breakage is concerned.
But not less risky concerning the final appearance of the finished carving. 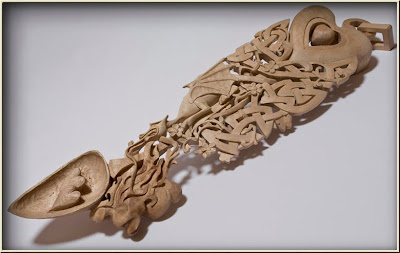 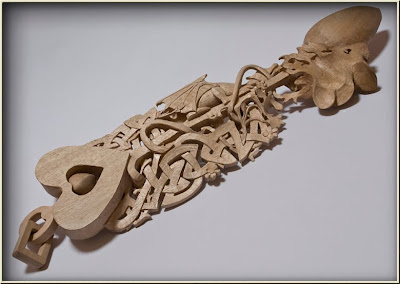 All the knot work has now been laid in, back and front and after smoothing their form with needle files and scraping where possible. I will then attempt the bevelling of the top faces of the ribbons that make up the knot work as originally intended. The back of the knots will be plain and flattish just a little concave. 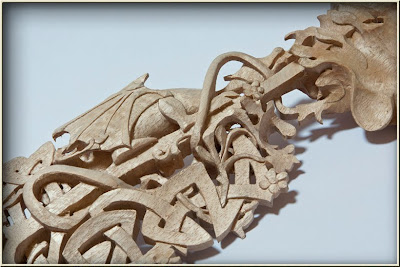 The scales on the dragon are also going to require quite a bit of work to complete and will also require some modification along the dragon's tail as I have ditched the round section tail for a more hard edged rhomboid section with better light catching properties. I had originally thought of using pyrography to engrave the scales on the dragon and to texture and darken the dragon in contrast to the rest of the spoon but this bold step will depend on many contingencies, including the nature of this particular timber and how well it responds to the technique, the simple fact that not all parts of the dragon are easily accessible and lastly whether I can convince myself by experiment and practice on scrap that the pyrography will make the appearance of the carving better and not worse. I have seen some striking examples of pyrographed toning on some spoons carved by Mike Davies and I've wanted to try this myself. Whether this is the spoon to try it on will depend on the results of experimentation on some scrap pieces. 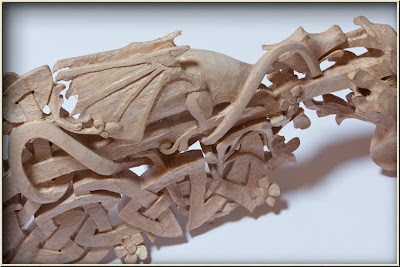 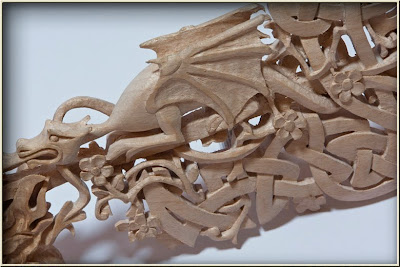 Where the bevels interact with over-layed flowers and stems may also prove tricky. 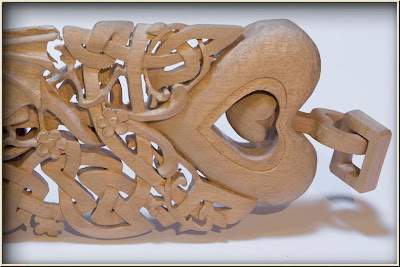 The bowl of the spoon needs just a little refining of its shape on the outer surface but quite a bit needs to be removed from inside the bowl and undercutting the two hearts contained within it. 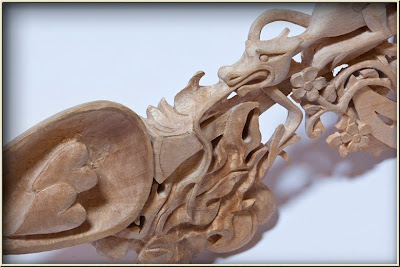 The spoon is starting to get somewhere but there is still some way to go yet.
Posted by Whimsical Wood at 4:48 PM